I had originally planned to put up a different post this week but some technical issues and the fact that I had a cold means that post will have to wait for some other week.

Today though, I’m going to bend the rules somewhat because this is an item that technically I didn’t buy at a thrift store but I did buy used.

This is my Nintendo Game Boy Micro which I purchased sometime in 2008 at The Exchange in Cuyahoga Falls.

The Game Boy Micro is, in my opinion, the sexiest piece of videogame hardware ever created.  It’s so tiny and jewel-like while at the same time so utterly minimalistic that it just looks better than anything else Nintendo, or perhaps anyone making portable game systems has ever made.  It’s not surprising looking at it’s brushed metal construction that the Micro was a contemporary of the iPod Mini and was widely believed to be Nintendo’s bid to capture customers looking for another stylish portable gizmo.  It’s so beautiful that you almost feel bad inserting a cartridge because it clashes with the color scheme.

Practially the Micro can be a bit tough to hold for any long period of time.  The tiny size (it only measures 50×101×17.2 mm) means that  in order to have your index fingers on the shoulder buttons and your thumbs on the D-pad and a+b buttons there’s a good chance you’ll have to hold your hands at an uncomfortable angle.  I have pretty small hands and holding the Micro is just about at the edge of discomfort for me.  Additionally, while the screen is bright and the colors are well defined the screen is still just 2 inches wide.

The Micro’s party piece is that it’s faceplates are removable so you can change the appearance of the system by changing faceplates with a plastic tool.

Here are the three faceplates I own, along with the plastic tool: 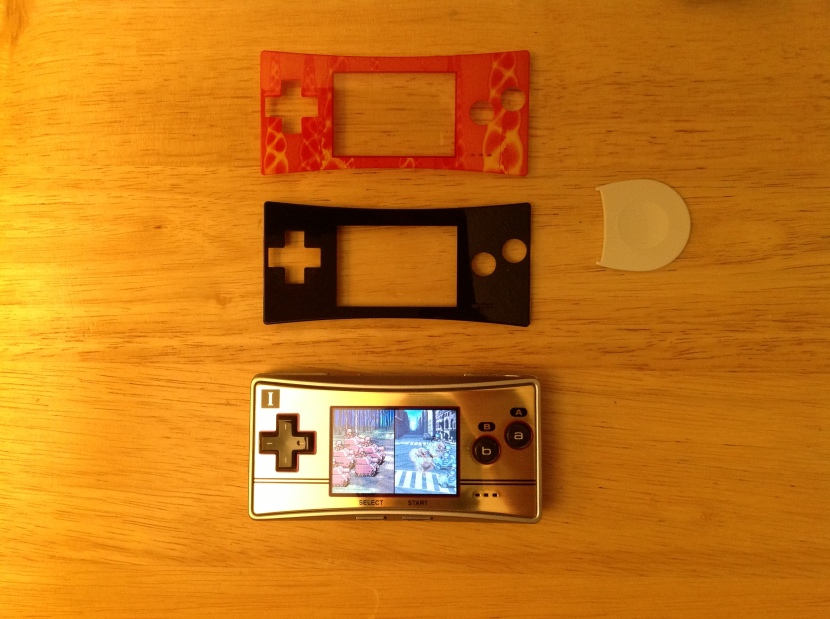 I believe that when I bought the Micro used it was wearing the obnoxious red/orange faceplate.  Back in 2008 you could still order new faceplates from Nintendo’s parts site so I bought the stylish black plate and the nostalgic Famicom faceplate.  Sadly today they only offer replacement AC-adaptors.

The plastic tool inserts into these two holes on the side of the Micro with the D-pad (on either side of the screw):

Micro owner Pro-tip: Always insert new faceplates so that you hook in the side with the longer hooks near the a+b buttons first.

This is what the Micro looks like without any faceplate mounted:

One practical advantage to the faceplates is that they act as hard screen protectors, but really they just look bitch’n cool.

Now, I would not be shocked if some day Nintendo reuses the Game Boy name but suffice to say Nintendo started selling a line of cartridge-based portable game systems with four face buttons (labeled a, b, start, and select), a D-pad, and one screen in 1989 with the original Game Boy and created a succession of systems with those attributes that ended in 2005 with the Game Boy Micro. 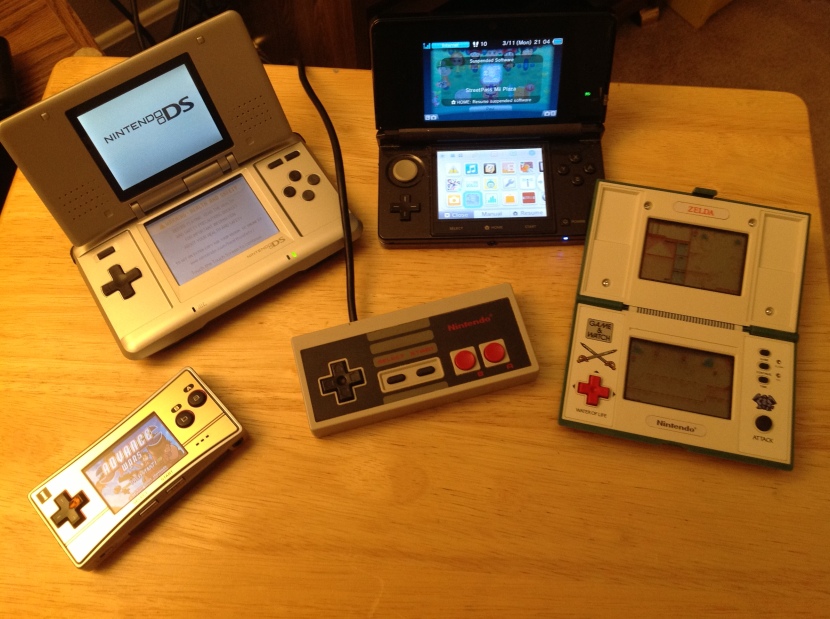 Following the Game Boy Micro Nintendo retired the Game Boy name and has produced the Nintendo DS line of cartridge-based portable game systems with two screens, one of which is a stylus-based resistive touchscreen, six face buttons (labeled a, b, x, y, start, and select), and (at least) a D-pad.

More importantly though, the Game Boy Micro was the last Nintendo system of any kind that was primarily built to play games based on 2D, sprite-based graphics rather than today’s 3D, polygon-based graphics.

This means that the Game Boy Micro was Nintendo’s final love letter to the era when it dominated the videogame world with the NES/Famicom and SuperNES/Super Famicom. There’s no coincidence to the fact that the Micro itself resembles and NES/Famicom controller.

From the release of the Famicom in 1983 to December 3rd, 1994 (when Sony released the Playstation in Japan)  Nintendo was undoubtedly the single most important force in the console videogame world.  Surely Sega played some part as well, but while they could on occasion be Nintendo’s equal they were never Nintendo’s superior.

But, as the world marveled at the Playstation and the rise of 3D graphics, Nintendo’s influence crested and then began to wane.  Today they are an important part of the industry, but they have never again become undisputed champion.

However, in the portable gaming arena, Nintendo was still  the undisputed champion (and still is today, as tough as it is for this PSP and Vita owner to admit).  When Nintendo decided to replace the Game Boy Color in 2001 it returned to a 2D-based system and created the Game Boy Advance.  An era of 2D nostalgia reigned with the GBA finding itself home to classics of the 16-bit era re-released as GBA games and new 2D classics that heavily drew inspiration from SNES games.

So, when Nintendo said it’s final goodbye in 2005 with the Game Boy Micro it was really closing the door on the era of 2D gaming it had dominated from 1983 to 2005.  In that way the Micro is comparable to the last tube-based Zenith Transoceanic or the last piston-engined Grumman fighter aircraft.  When a great company wants to say goodbye to one of it’s great products they will often create something fantastic as a last hurrah and that is clearly what Nintendo did with the Game Boy Micro.