I found this Quadboard at the Abbey Ann’s off the Circle in Tallmadge sometime last year.  It was sitting on their counter in a pile of items that had just came in.

When I saw it I immediately recognized that it was some sort of old RAM upgrade (from the ordered banks of DRAM chips on the left side of the board) but when I looked closer I impressed with how just how old it was.  As third party add-ons for IBM PC hardware goes, this is almost as early as it gets.

The box and the documentation is for a 384K Quadboard from 1984 (with six banks of nine 64 kilobit DRAM chips) but the card inside is labeled 1982 and only had four banks of nine chips.  Also notice how the picture on the box has two connectors for ribbons but the card I have only has one. 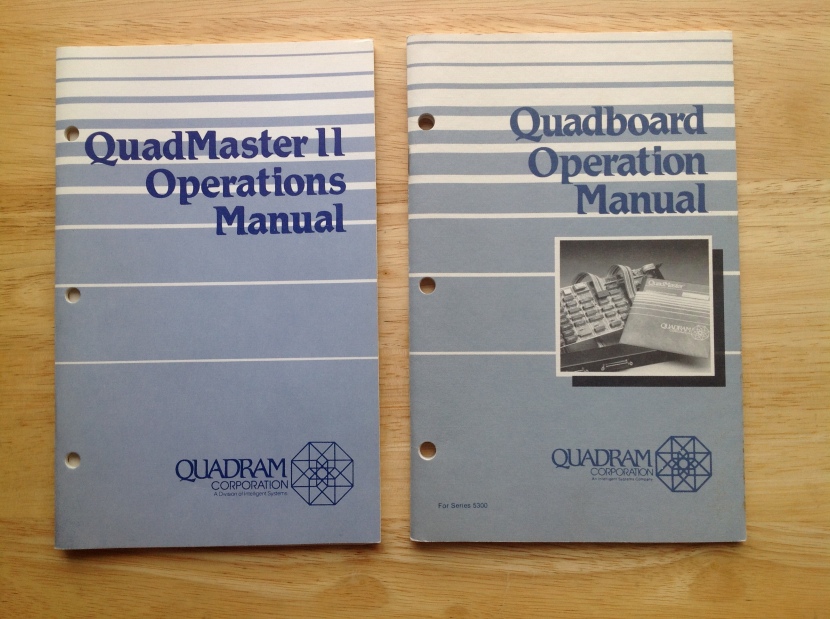 In doing some research about the Quadboard it looks like in 1982 Quadram sold several models all with the same number of DRAM chip sockets but with different number of chips installed.   The one I have seems to be the high end of the original Quadboard line which means it’s fully populated with 256K RAM.  If you had one of the cheaper models you could install more chips yourself as long as you added a whole bank at a time.

I believe the leftmost of the two sets of DIP switches on the top of the board are how you tell it how much RAM the PC has on the motherboard (so it knows what address to start with) and how much RAM is installed on the Quadboard.

Incidentally the reason that four banks of nine 64 kilobit memory chips equals 256K is that the 9th chip in each bank is used for parity checking, like on the IBM PC’s motherboard. 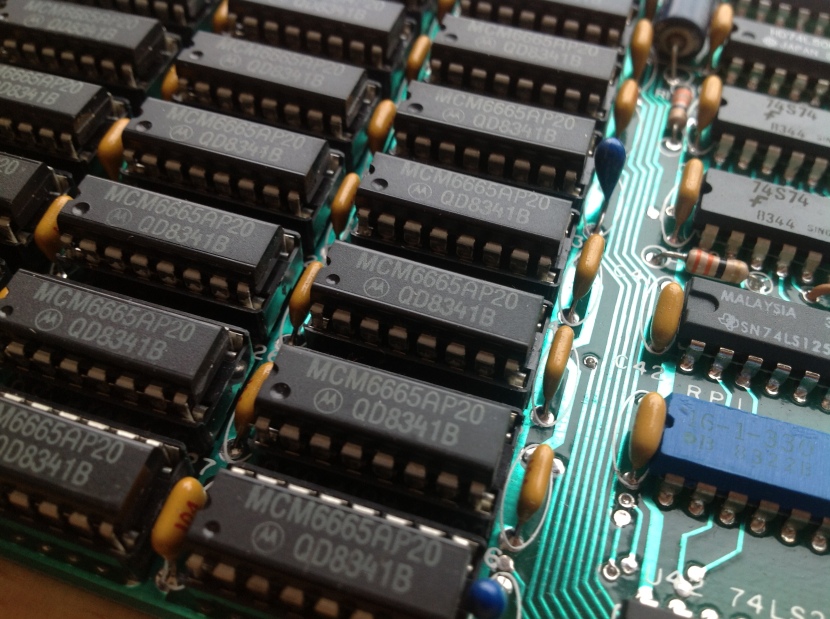 The Quadboard is interesting because from it you can learn a lot about the state of hardware in the early days of the PC.

The original IBM PC was well known to be an open architecture and expandable because of its five expansion slots. What is less well known is that you basically needed to use at least two or three slots in order to use the machine.

Other than a keyboard connector (and a rarely used and later removed cassette recorder port) the PC had almost no peripherals on the motherboard.  In order to use a monitor or a disk drive or a printer, or a connect to an external modem you needed cards that supported these things.

In the simplest configuration using IBM’s hardware you could use a disk controller card and a monochrome display adapter (that came with a printer port) and the machine would be usable with only two cards.  But, you didn’t have a serial port.  Because the display adapter for a color monitor didn’t have a printer port you were looking at using three of the precious expansion slots just to be able to use the machine with a color monitor.

If you wanted to add something simple, like a clock that remembered the time when the PC was off, you we’re going to need to burn one of the few remaining slots.  You could easily run out of slots and your expandable IBM PC would be a lot less expandable.  As a result, expansion board manufacturers like Quadram started selling boards with multiple functions crammed on one board.

This Quadboard gives your PC a battery-backed real time clock, a serial port, a parallel port, and a RAM upgrade on a single board.  I would imagine that because of the expense of the RAM, the reason you bought the Quadboard was for the memory upgrade aspect of the board.

The IBM PC models being sold in 1982 only came with up to 64K of RAM.  In 1983 a later PC model came with a whopping 256K RAM and the XT started with 256K.  If you want more RAM then upgrades consisted of an 8-bit ISA board like the Quadboard.

An often overlooked aspect of the early history of personal computers is how important the cost of RAM was.  In 1977 when Atari introduced the Atari 2600, they could only afford to put 128 bytes of memory in it.

The reason why the Macintosh in last week’s entry was released in January 1984 with only 128KB of memory was that Apple had a limited amount of space on the board for RAM.  They either had to wait for the next generation of higher capacity RAM chips to fit more RAM in the same space (and add $1000 more to the cost of a machine that was already $2495) or send it out the door with only 128K memory, knowing that would limit the machine’s potential.  But hey, real artists ship.

So, it must have been a huge deal for whoever bought this Quadboard in 1982 to be adding 256KB into their PC.

What would someone have gained at the time by adding 256K to their PC?  You have to remember that unlike the period from about 1990 to 2005 or so when it seemed that your PC was obsolete after 2-3 years the period from 1981 from 1990 was very different.

Once the basic platform had been established of a PC with an 8088 processor and MS-DOS it sort of stuck that way for almost 10 years.  When subsequent processors like the 286 and 386 came out most popular software largely used them as fast 8088s and didn’t take that much advantage of their new capabilities.  It wasn’t really until 1990 and Windows 3.0 that the needs of graphics and multitasking finally forced the platform to move forward, which obsoleted the 8088 and 8086.

For example, in 1987 the popular dBase III Plus only required a PC with 256KB RAM, though it recommended 384KB.

Lotus 1-2-3 Release 2.2 from 1989, which was considered a pretty heavy application at the time, wanted at least 320KB memory, though they recommended 512KB.

Even a pretty serious game like 1986’s Starflight from Electronic Arts just asked for 256KB.

So, someone dropping a grand on 256KB memory in 1982 was keeping their PC from the scrap heap through about 1989.  That’s pretty good value for their money.

On the other hand, the owner probably wanted more and that’s why this 256KB Quadboard ended up in the box of the 1984 model that accommodated even more memory.

If you, like me have a bizarre fascination with the early days of PC hardware, these old books can be very informative.