Other times though, I’ll see something that was interesting but that I decided for various reasons not to buy,  Recently I decided to start documenting these things with my iPhone.  Keep in mind that taking photos of items in thrift stores is not easy.  I don’t want to draw too much attention to myself and often the lighting is very bad.  These are not pictures that are up to normal Electric Thrift levels of clarity and composition.

This Bang & Olufsen Beogram 2400 turntable was a real surprise to find nestled within the serpentine labyrinth that is the Abbey Ann’s off of Tallmadge Circle.  You can often find stereo equipment at that Abbey Ann’s but this was a cut above their usual offerings.

What this had going for it was that is a striking European early-1970s design.  It was in the original box, including the cartridge, the Styrofoam packing material and the instructions.  I adore the look of European electronics so this sort of thing is right up my alley.

There were two problems here.  First, I think the price was a bit steep, though Abbey Ann’s is known to negotiate quite a bit.  The second problem was that all of the glue on this thing had decided to dry up and much of the trim was coming off.  It’s a bit hard to see in this photo but the wood-grain on the front was just hanging off.  The little metal plate on the top of the end of the tone arm was coming off as well.  The dust cover was getting stuck on something and would not close correctly.

I think if this has been one of B&O’s linear tracking Beograms I would have bought it in this condition.  However, I’m already backed up on conventional turntables and this B&O looked like it was going to be trouble so I took these photos and moved on. 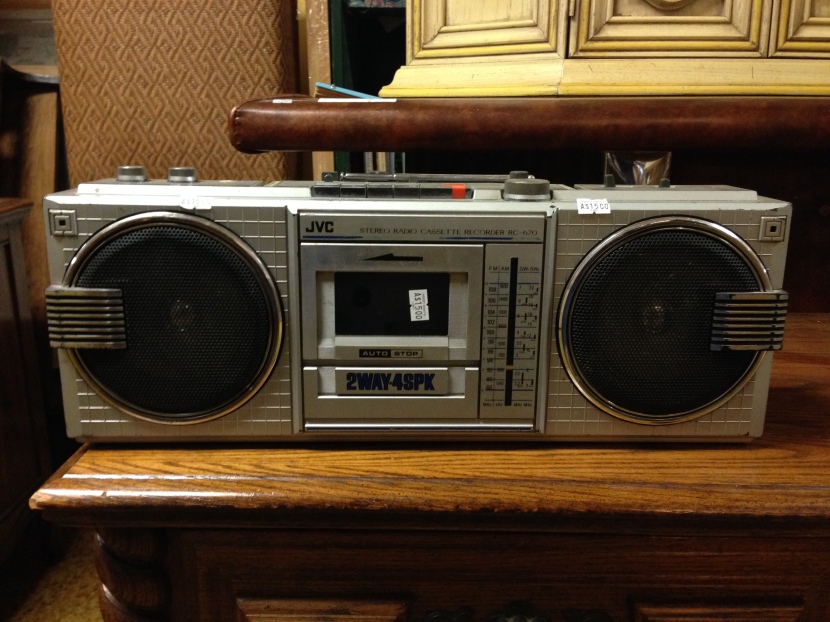 This tugged at my heartstrings a bit because my Dad had a similar (probably slightly more recent, because it was black) JVC boombox in the late 1980s/early 1990s.  I fondly remember making recordings with my brother using the built in microphone and tape recorder.  My Dad had originally bought that JVC boombox because it got shortwave, like this one.

Despite all of the 80s electronics I buy, I haven’t yet gotten into boomboxes.  I think I’m mainly waiting for one that’s in nice condition and fully functional. 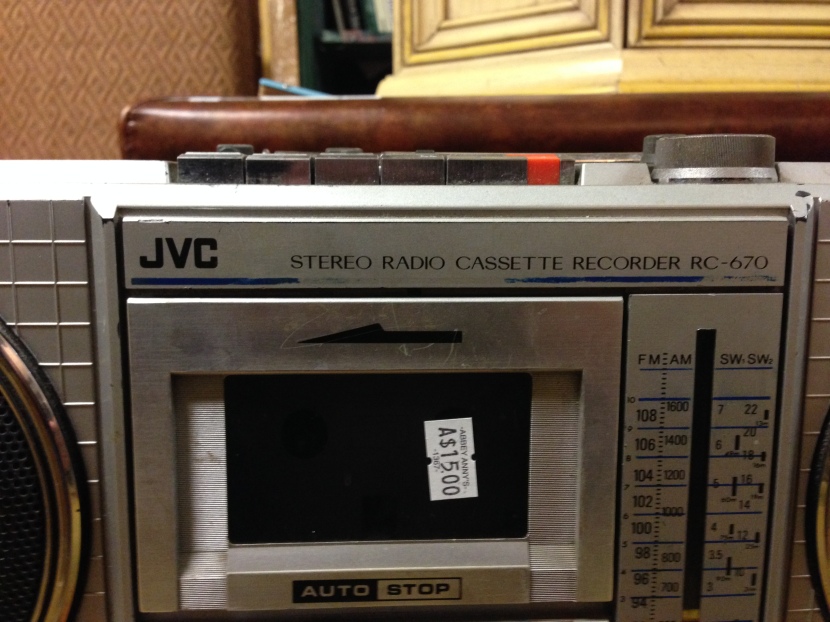 Any time I’m looking at something with a tape player I’m worried about the condition of the mechanism.  There are so many mechanical parts, including belts, that can deteriorate.  I remembered that eventually the tape mechanism in my Dad’s 80s JVC boombox broke and I wasn’t really in the mood to spend even $10-$15 to find out if this boombox had any of the myriad of problems that tape decks can develop.

Those tape issues were also the first thing I thought of when I saw this Ampex reel-to-reel tape deck that showed up at the State Road Goodwill in Cuyahoga Falls.

I’ve wanted a reel-to-reel for a while now and this one is gorgeous in a mid-1970s silver and wood-grain way.

There were three problems here.  The first is that reel-to-reels are notoriously troublesome.  I believe one of the more notable moments of my Dad’s thrift store shopping career was when a reel-to-reel he purchased started smoking when he brought it home and turned it on.

The second problem was that while this is a great looking item it lacks two features I want to see in a reel-to-reel: Four channel output and some sort of exotic noise reduction like Dolby A or DBX.  To me, the appeal of a reel-to-reel should be it’s exoticism compared to the common cassette deck and having fancy noise reduction should be part of the fun. 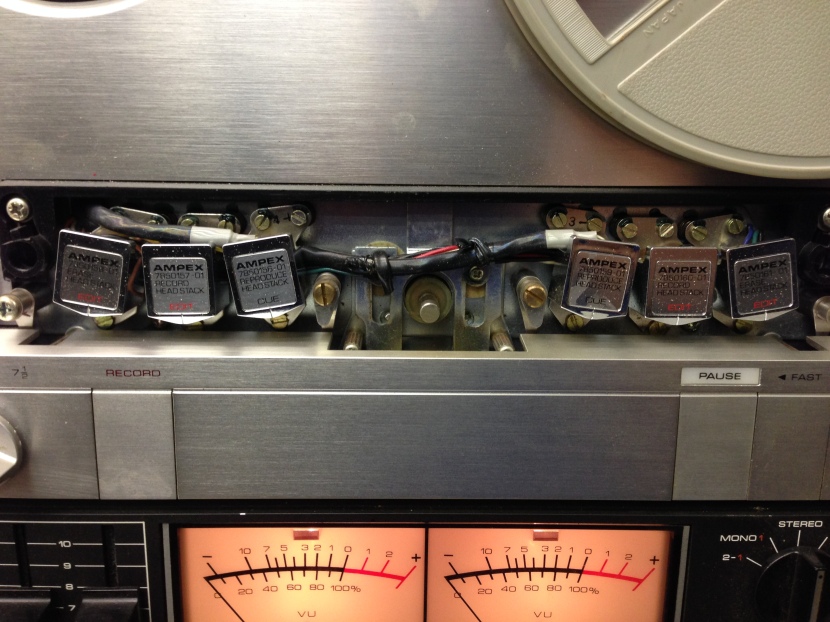 The third problem was that Goodwill wanted $50 for this thing.  Sometimes I really question the pricing of some of this stuff I’ve seen at thrift stores lately.  Asking $50 for something that’s for all intents not tested and sold “as-is” is not cool.

Coin collectors have a pricing theory that works like this: The price of a coin starts with the worth of the metal (copper, silver, gold, etc) and then you add a “numismatic premium” for the rarity of the coin and the condition of the coin.

I like to think that electronics at thrift stores should work in the opposite way.  You start with what a sort of idea of what the thing should be worth and then subtract a “broken-ness risk premium” for the possibility that the thing is incomplete or broken.

$50 is a fair price to pay for a fully operational, totally complete (minus instructions and packaging) reel-to-reel.  But it fails to take into account my risk in buying a potentially broken item.

This Memorex S-VHS deck from the same State Road Goodwill was the first S-VHS deck I has ever seen at a thrift store.

It was in pretty bad shape and my same concern with the tape mechanisms on the boombox and the reel-too-reel applied here as well.

There was also a front panel door missing.  This looked like a lot more trouble than it was worth, whatever price they had on it.

Completeness is also a common reason I don’t buy some things.

This strange thing was at the Village Thrift on State Road a few months ago.  I didn’t know what it was at first.  Maybe some sort of TV?

When I turned it around and read the label things became clear. 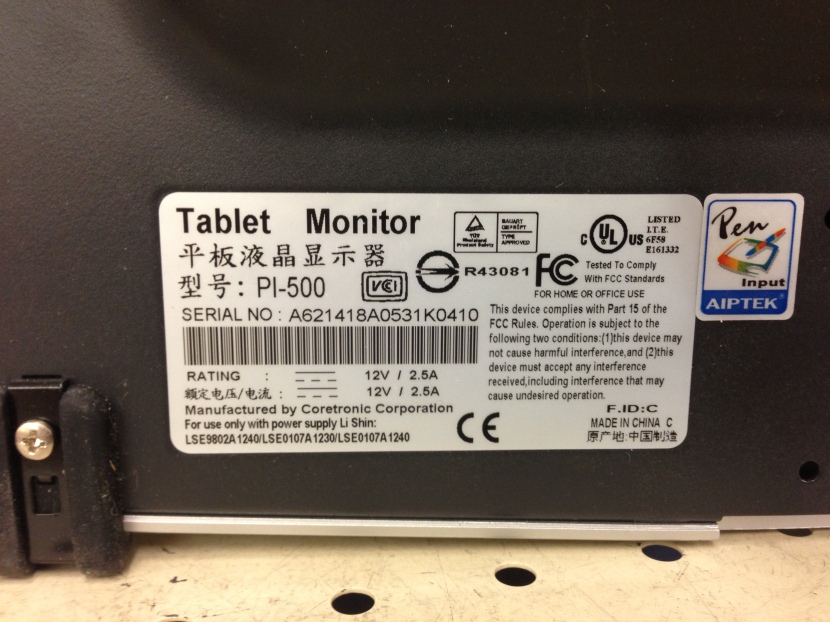 This was some sort of pen-based tablet PC input device, like a poor man’s Wacom Cintiq.

I have learned from an experience with a Wacom Intuos (which I someday may write about) that you should never buy a pen-based tablet of any type without the pen because finding a suitable pen can be very expensive.

Completeness was also the reason I didn’t buy this Sony Mavica camera. 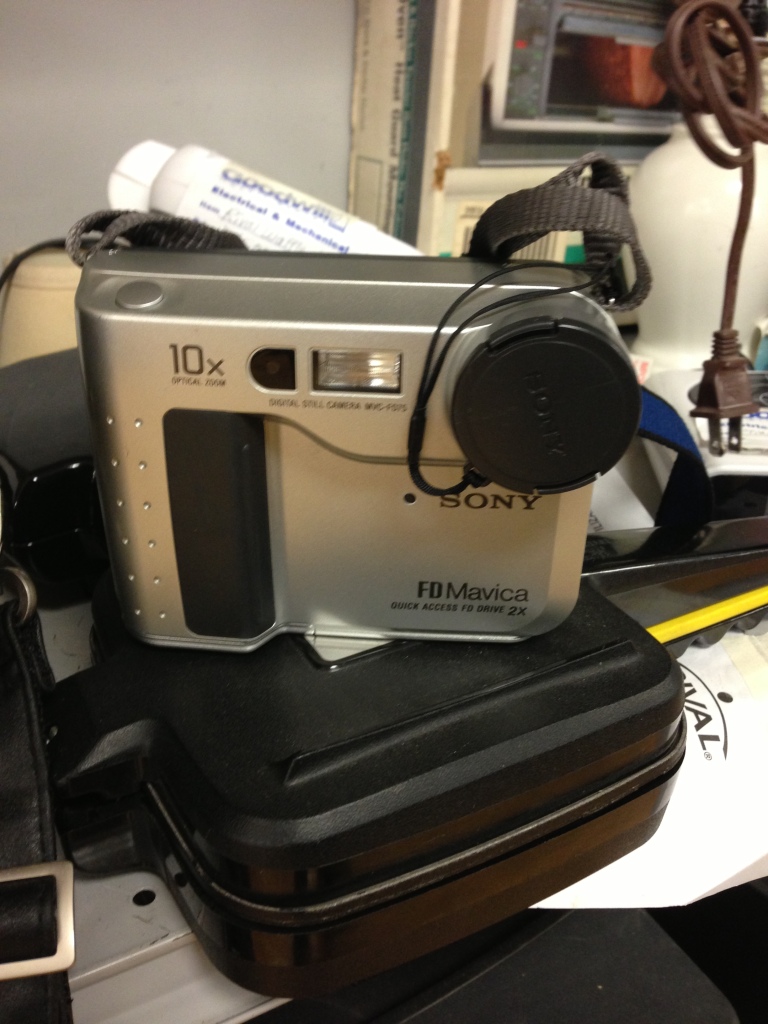 Comparatively early digital cameras are an area I’ve wanted to start collecting, so I was happy to see this Mavica show up at the Midway Plaza Goodwill.  Unfortunately, the very proprietary looking battery (Sony, natch) was missing.  I looked for a place where I could at least plug in an AC adapter.  Then, I realized that there was this notch cut out of the area around the battery door with a little spring loaded door.  it seems like rather than having an AC adapter this model had a thing that went into the battery compartment with a cord coming out of it (hence the little spring-loaded door) that acted as the AC adapter.  Another piece of proprietary crap I would have to pay shipping for on eBay.  Not worth it.