In general the ground rule for this blog is that I only write about items I bought used.  They don’t necessarily have to come from a thrift store, just that I did not buy them new.  I’m going to bend that rule a bit on this occasion because another aspect of this blog is that basically all of these items are frivolous.  That is to say I enjoy finding them because I like looking at them and learning about them but they are basically useless. 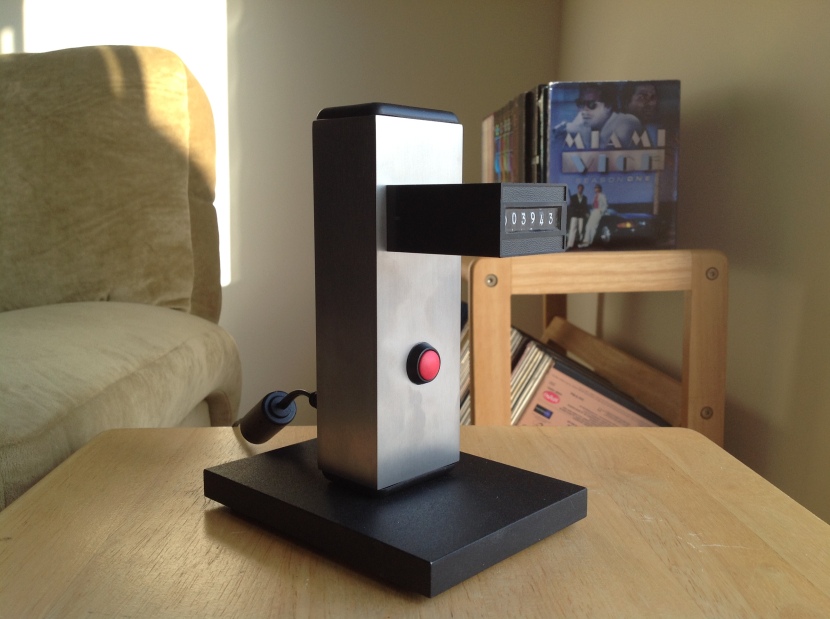 I’m a big fan of Brady Haran’s YouTube empire of science and technology channels: Periodic Videos, Numberphile, Sixty Signals, Deep Sky, and Computerphile.  On a Sunday last September I got up at a leisurely time and happened to check Numberphile.  He had just published this video about an enigmatic tabletop device that mechanically displayed prime numbers.  I was transfixed.

It turned out that this thing was called a Primer, an electronic kinetic sculpture by the LA artist Karl Lautman who was selling them to the public through a Kickstarter.  There is a big red button and when you push the button the counter clicks off to the next prime number.  It only displays prime numbers.  That’s all it does.

At first, this seems rather pointless, and that’s part of the fun.

However, the Numberphile video brought up an excellent point.  The loud clicking noise the Primer’s mechanical display makes when it’s incremented gives you an audio cue to gaps between primes.  Most discussions of mathematics look like Greek to me but from what I’ve gathered from Numberphile and other descriptions of mathematical topics for the layman is that there’s no formula that will spit out a list of all of the prime numbers (though, there are formulas that spit out some of them).  As a result, there’s quite a bit of mathematics devoted to the distribution of prime numbers.  We can know about how many primes there are less than a given number, but not exactly what they are without checking each number.

As a result, the idea of owning a desktop art installation that spits out prime numbers was just astonishingly cool.  There were two big catches: First, a Primer cost $120.  I think for say, $50, it would have been an instant buy for me but $120 required much more thought.

Second, there were only going to be 60 Primers made through this Kickstarter and on that Sunday last September nearly all of them had already sold.  I think when I saw the Numberphile video there were less than six left…And Numberphile is followed by hundreds of thousands of people who at that very moment were probably having the same series of thoughts I was.

Knowing that potentially the last remaining Primers in the Kickstarter could be taken at any moment I decided to take a shower and mull it over.

What I decided was:

1) I want to own geeky toys, but not obvious ones.  In principle that’s the whole point of this blog.  A toy that combines the mysterious mathematical aura of prime numbers with a mischievous Red Button is the epitome of geek toys.  At the same time it’s not a Doctor Who action figure, or a pewter Enterprise, or something else obvious.

2) I like the idea of owning a piece of art.  I think until very recently I didn’t understand art.  I thought of art in terms of something you look at and move on to the next thing.  I think this changed a few years ago when I was looking at a quarter and realized that I really liked the way this looked.  I was deriving pleasure from the aesthetics of the thing.  Art is about making you feel something by looking at an object.  The quarter is supposed to make you feel authority and confidence.  Something like the Primer exudes mystery and playfulness.

3) While spending $120 on something like this is clearly frivolous, so is basically everything I collect.  I bought a copy of Windows/386 just to look at it…How is this any different?  In fact, this is better because it has a button.

Karl, the artist, posted a number of very cool videos about how he was putting together the Primers.  He explained that while he’s done a lot of this type of sculpture he was not very experienced with building 60 of them at once.  Even before the Kickstarter had ended he showed how he cut and painted each of the bases.  The most interesting part for me was how he showed that the aluminum bodies of the Primers were actually cut sections of long tubes.

On December 3rd, my Primer came in the mail. 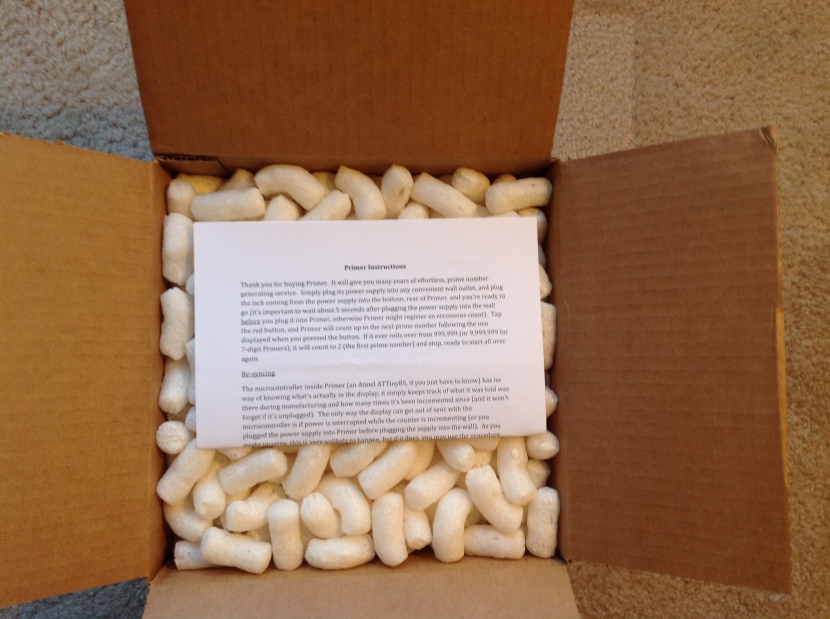 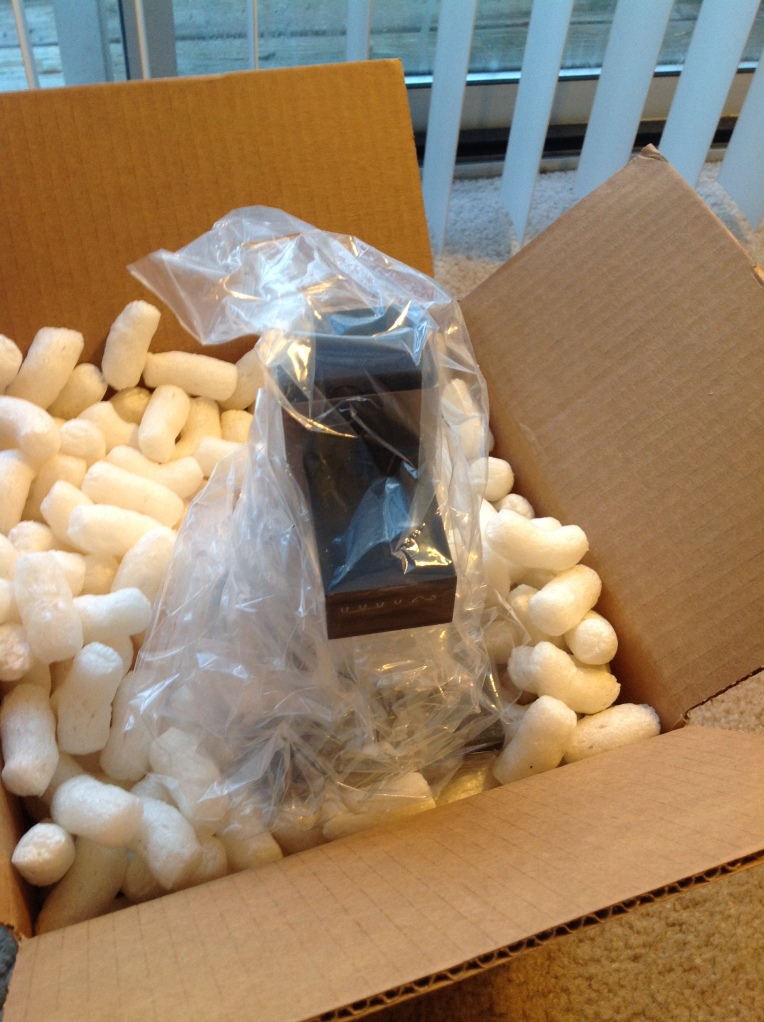 I eagerly unpacked it and set it up on top of the upturned cardboard box that in came in. 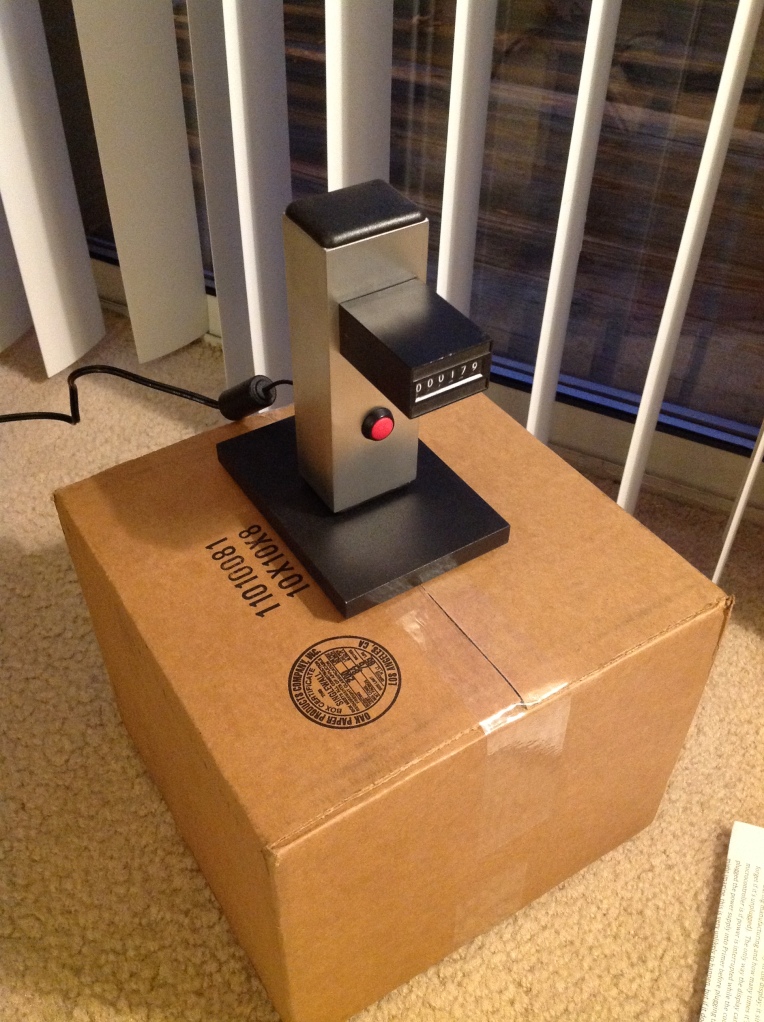 And I set about clicking.

The best thing about the Primer is that sound.  Every time I hear it the sound and see the action of the numbers changing it reminds me of the CRM-114 from Dr. Strangelove and I get a big smile on my face.

The letter that comes with the Primer explains that the little Amtel microcontroller inside does not know what the value of the display is.  Instead, it has a list of how many times it needs to click the counter forward to reach each prime number. 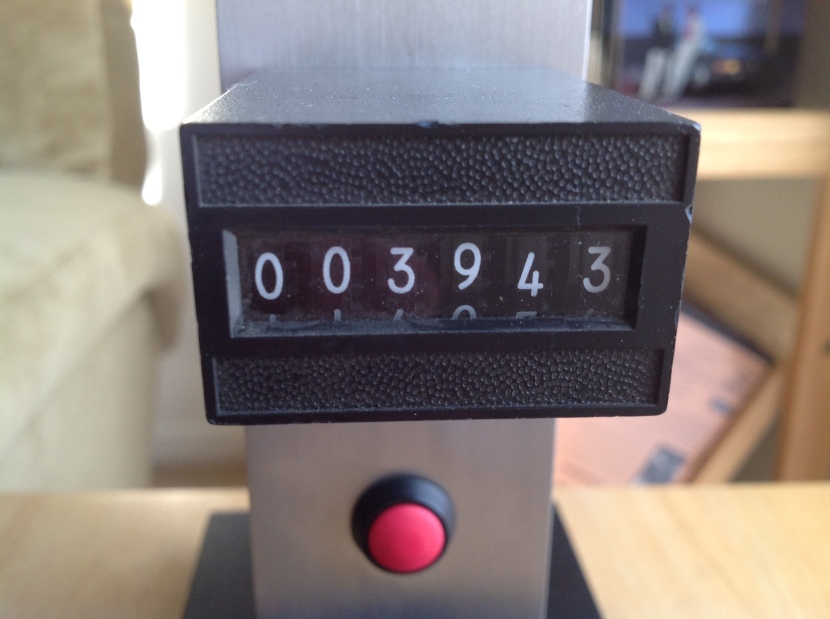 The bottom of the Primer is where mine is numbered with #56 and signed by the artist.  There’s also a label where people who wanted to contribute to the Kickstarter but did not want to buy a Primer could get a silly message: 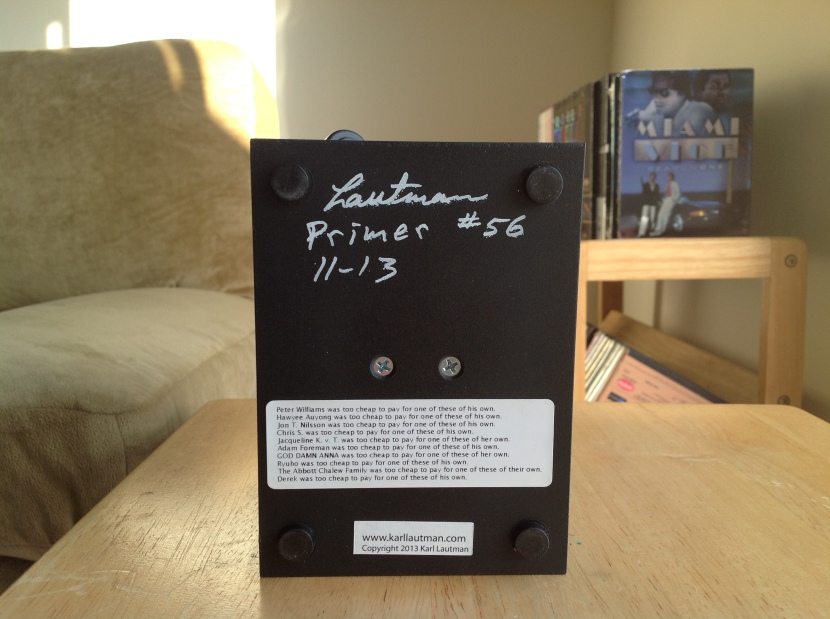 The counter itself is an Eaton “mechanical totalizer“.  The artist says that he finds them in batches on eBay.  You can tell the counter’s condition that it came from another life somewhere. 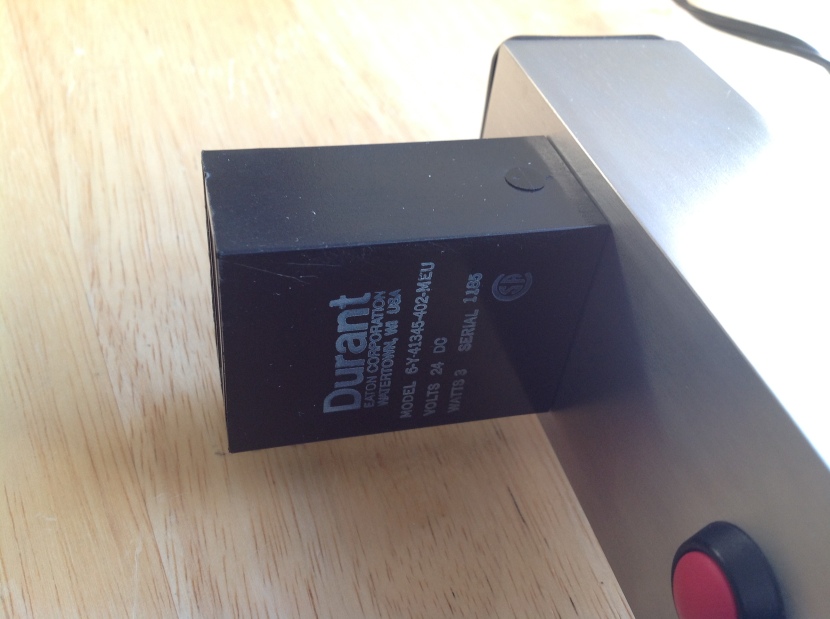 In case you’re wondering.  After this Primer gets to the last prime number before 999999 the next button press will reset the counter to 000002, since 2 is the first prime number.

The power plugs into the back.  I assume those are the screws that hold the counter to the aluminum body. 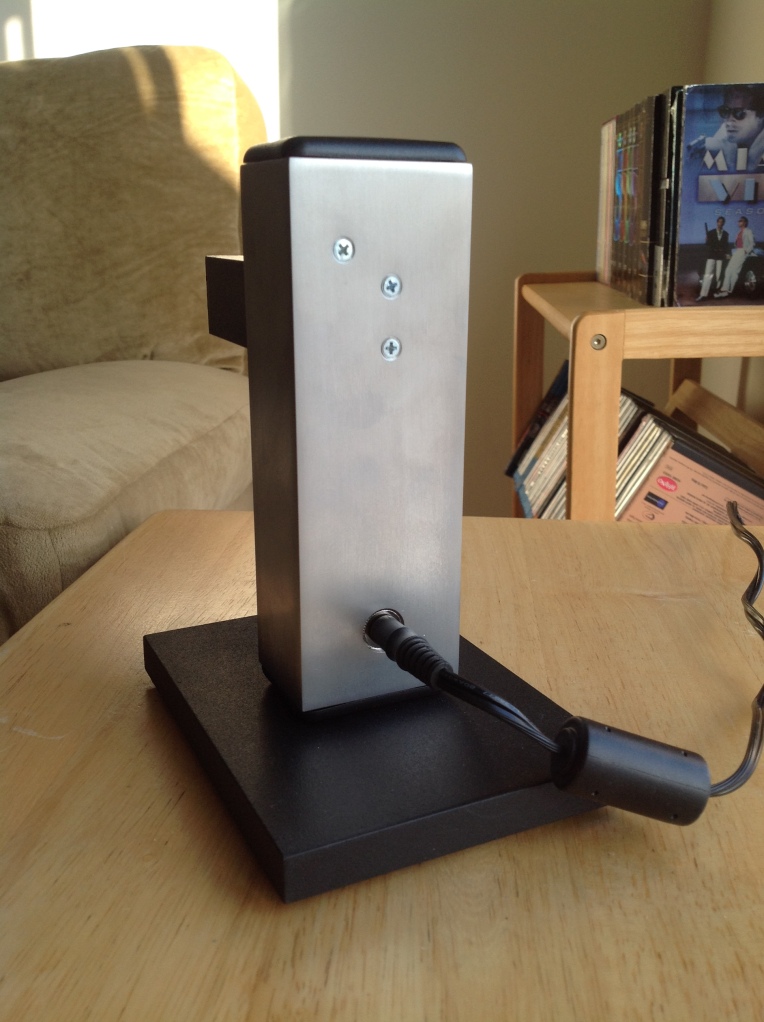 I love the Primer’s color scheme: Smooth aluminum with black plastic and that seductive red button.  It reminds me of HAL 9000.  It also reminds me of the shape of a water faucet.  It’s like a faucet for prime numbers.  Drip…drip…drip… 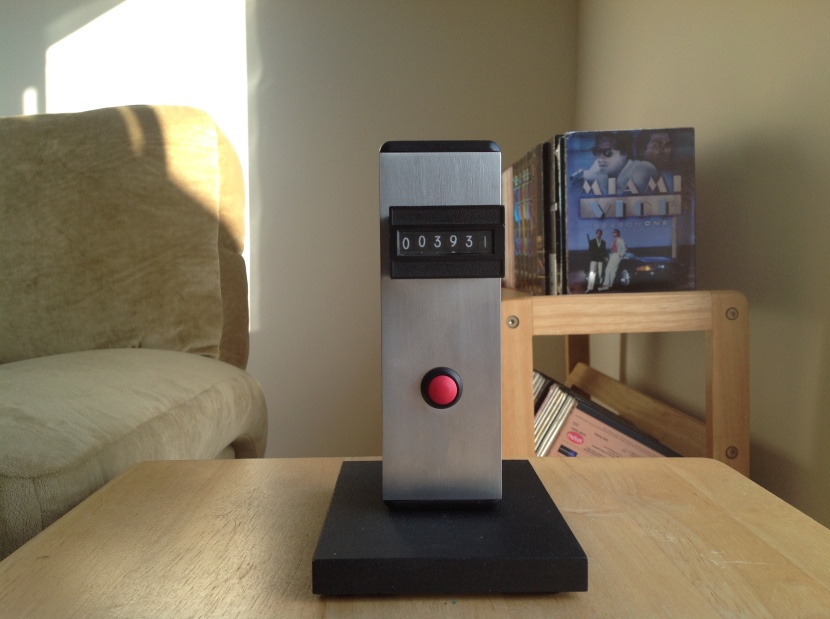 If this sort of thing excites you, you can buy a new Primer of a slightly modified design from the artist for $160 (which gives me some smug satisfaction for buying early at $120).